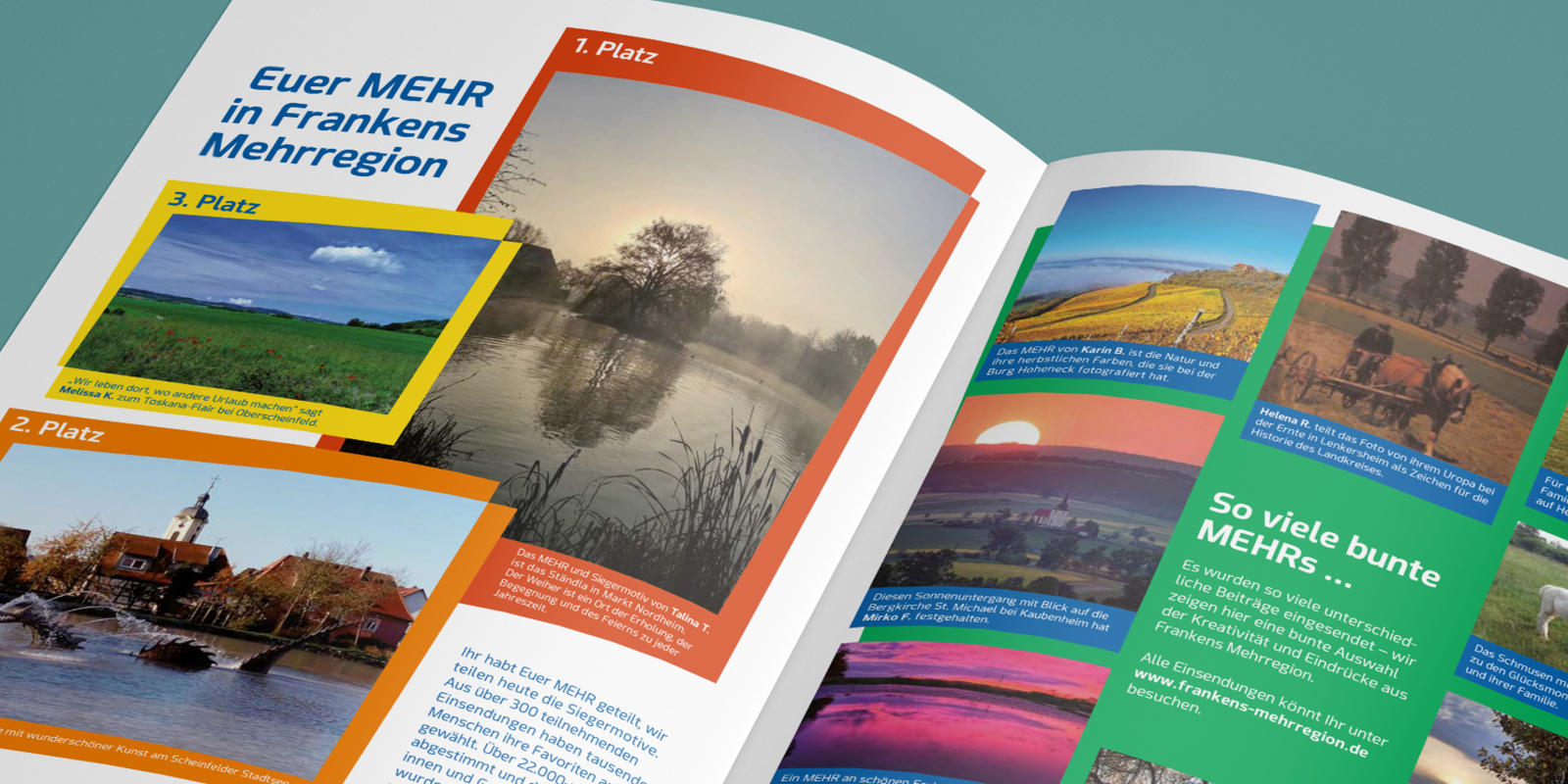 Since 2016, the administrative district of Neustadt a.d. Aisch-Bad Windsheim in Bavaria has been marketing itself under the registered brand »Frankens Mehrregion«. By developing and implementing an image campaign, the content of the brand »Frankens Mehrregion«, which is still young and little known among the population, should be improved from 2020 onwards – and therefore the region as a whole should be strengthened and marketed as a centre of life, economical area and leisure region.

Frankens Mehrregion used the post-lockdown summer of 2020 to present itself as a leisure and recreation destination to the neighbouring cities and metropolitan areas. The region had the right offer at the right time for the numerous people who wanted to finally get outdoors again: “A perfect day”.

In cooperation with the team at the district office in Neustadt a.d. Aisch-Bad Windsheim, topics, activities and attractions were researched and collected. Under the common motto »Ein perfekter Tag ist …«, the information was conveyed to the target group in handy offer cards under terms such as »auspowern« or »durchatmen«.

The cards were presented in small displays in over 300 restaurants, hotels, museums and leisure facilities. A QR code led directly to further detailed information at www.frankens-mehrregion.de.

In order to reach the target groups in the neighbouring metropolitan areas, outdoor advertising spaces were booked in Nuremberg, Fürth, Erlangen and Würzburg and advertisements were placed in the regional daily newspapers. 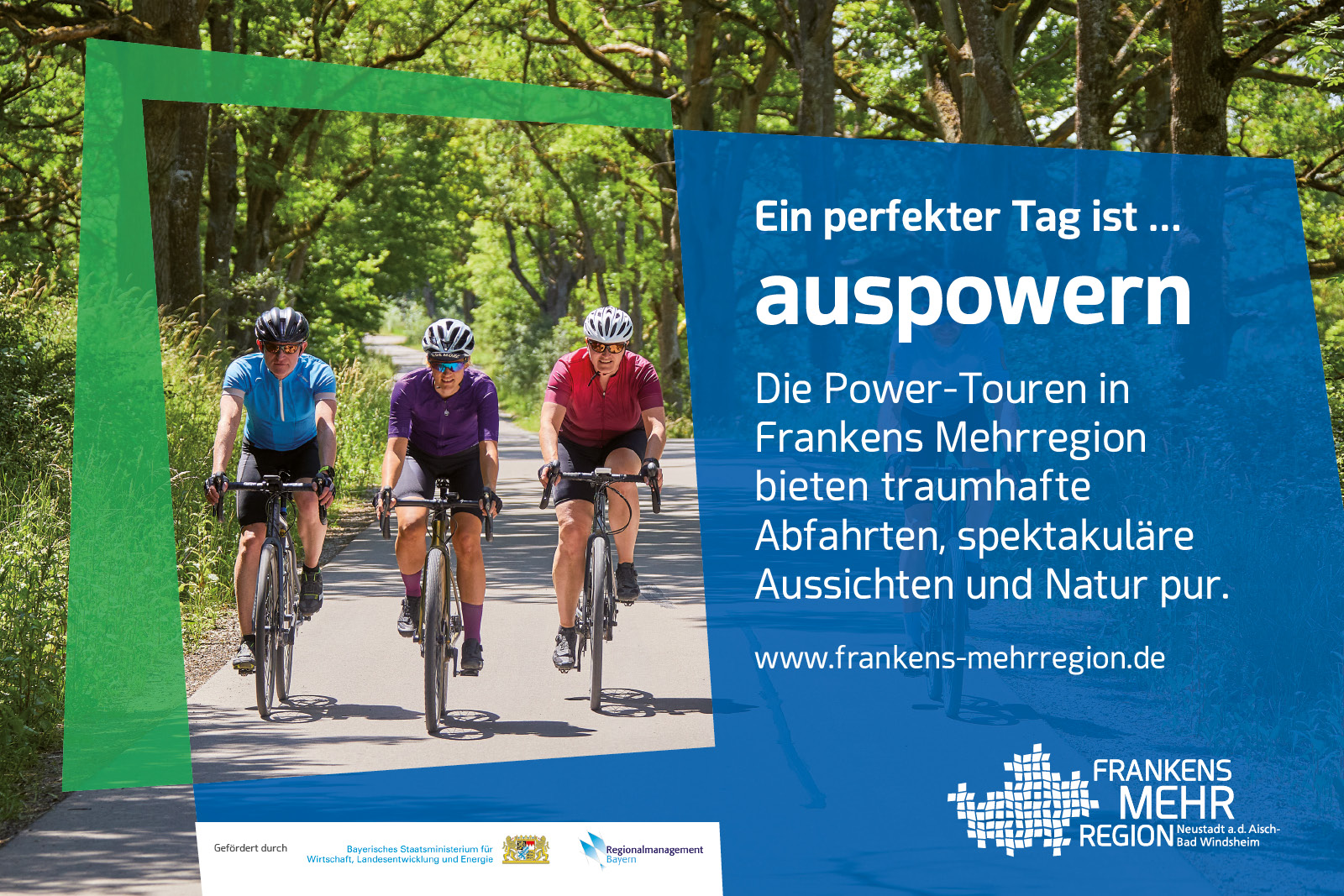 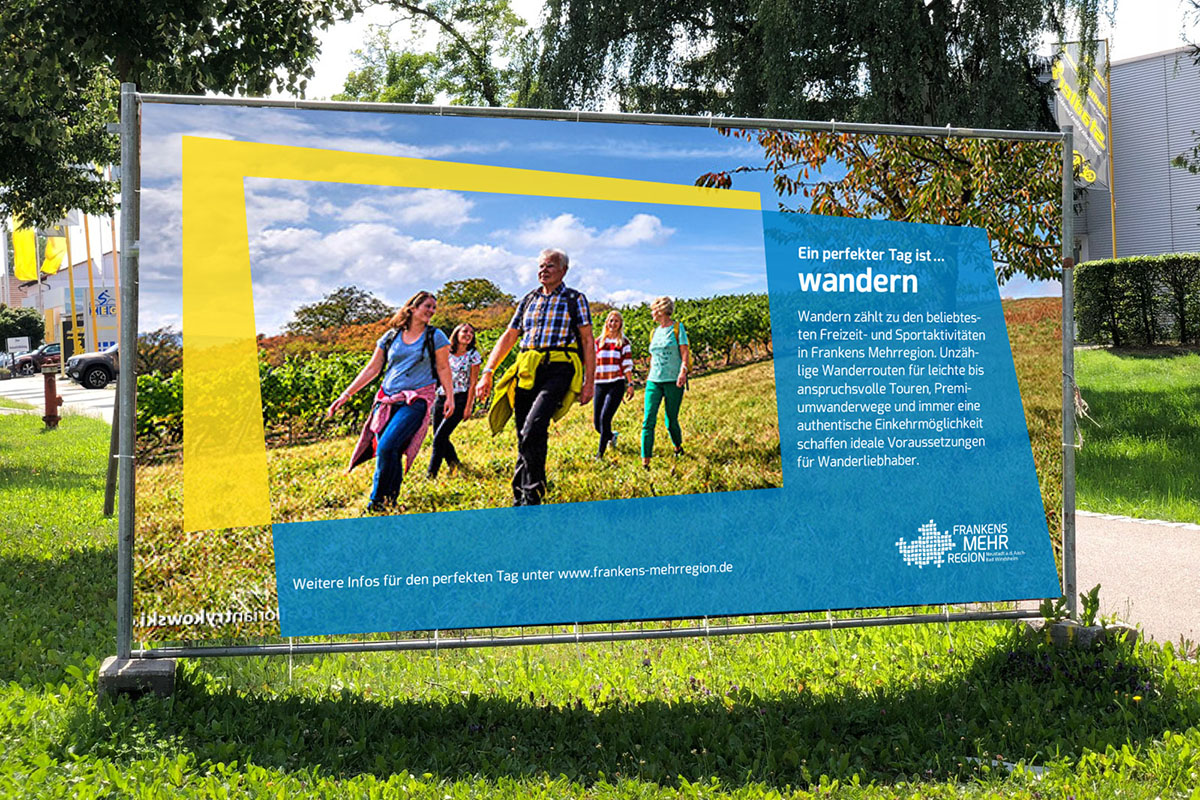 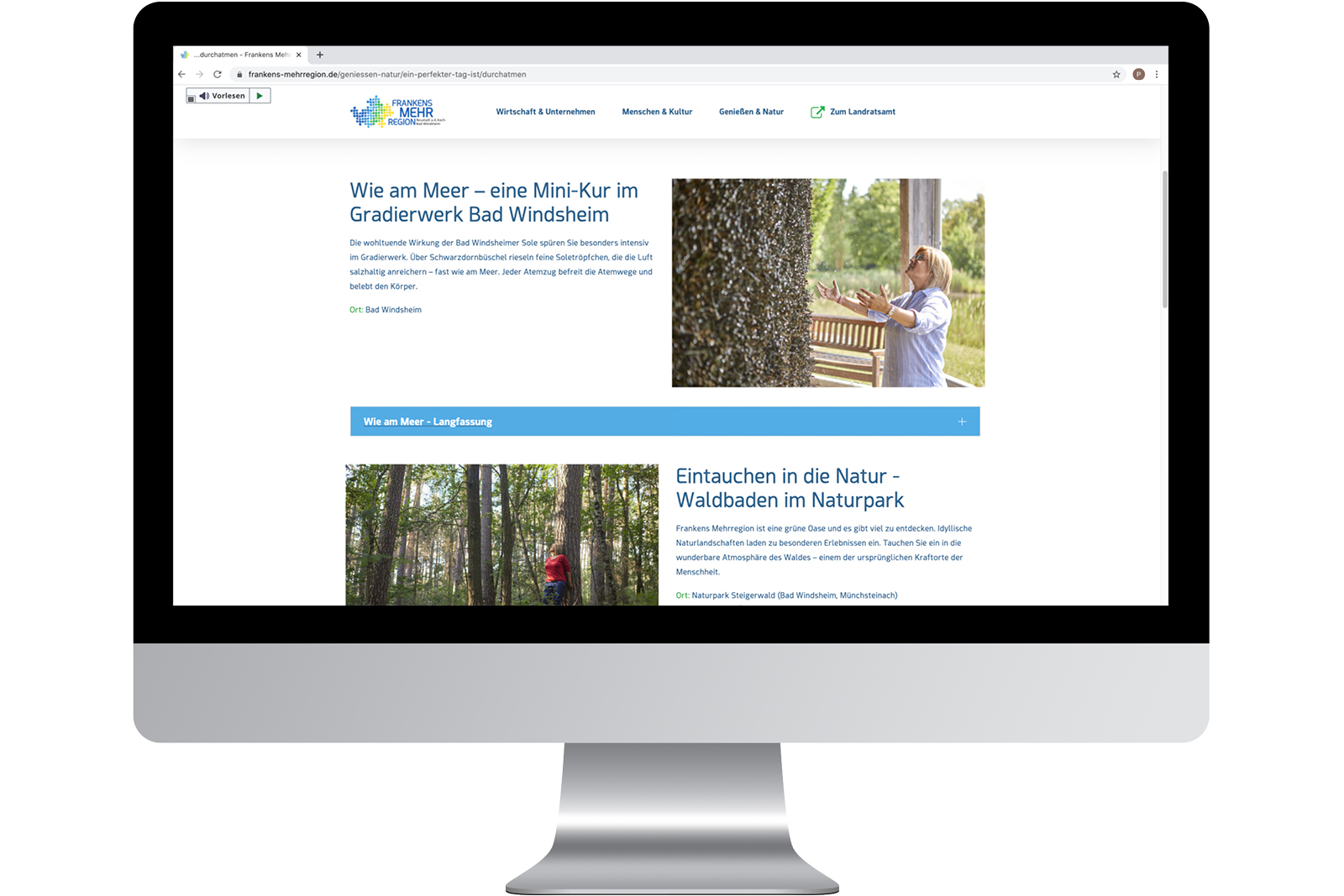 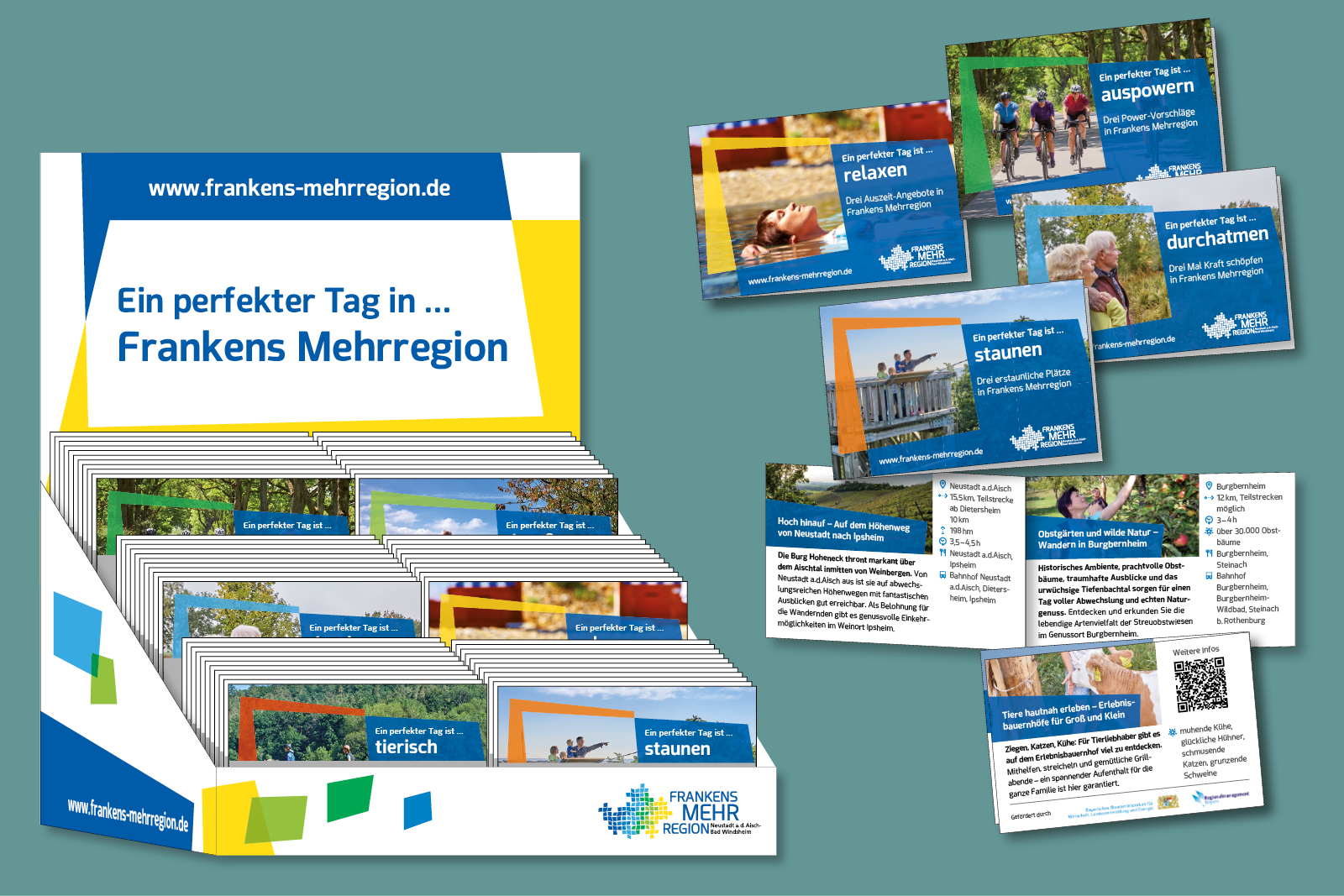 The best approach to make people aware of the good things they have: Let them talk about it or express themselves creatively. Therefore, EMBASSY designed a hands-on campaign with the invitation »Teile dein Mehr«.

How can you make people aware that they live in a region that has many offers? Of course, you could post lists or write lots of headlines. But the most effective way is to let people tell and share their stories. The »Mehr« in Frankens Mehrregion was still abstract at the beginning of the campaign and, above all, not personal at all. From this objective of both gathering and presenting the benefits of the region and highlighting the personal value, EMBASSY created the campaign »Share your MORE!« The population of Frankens Mehrregion was challenged to capture and share their »more« in the district in photos, texts, drawings or videos. Everyone could take part in the creative competition and submit their contributions. At the same time, the entire population could cast their votes for the most beautiful contributions and choose the most popular pictures, which won great prizes. A painting competition was launched in parallels at the schools in order to incorporate the perspective of children in particular and also to give their pictures a chance to win.

The campaign was promoted via the county journal, community leaflets, social media and promotional packages to the communities. The campaign started with a call to action visual, which was then complemented by an explanatory visual. The first entries were then used to inspire further submissions and ideas. After the submission deadline, there was another call for votes. By the end of the voting, great media coverage was given to the winning images.

The competition gained a lot of attention and inspired many people in the region. 318 entries took part and 22,271 votes were submitted in the process. A remarkable response in a district with a population of only 100,000.
However, more important was the effect achieved: people saw what other people thought was good in the region. On the homepage, people scrolled through 318 pictures of “more” in the district. The images as a whole, put together by people and shown next to each other, painted a wonderful, authentic picture of Frankens Mehrregion. »Share your more« became »This is our more.« 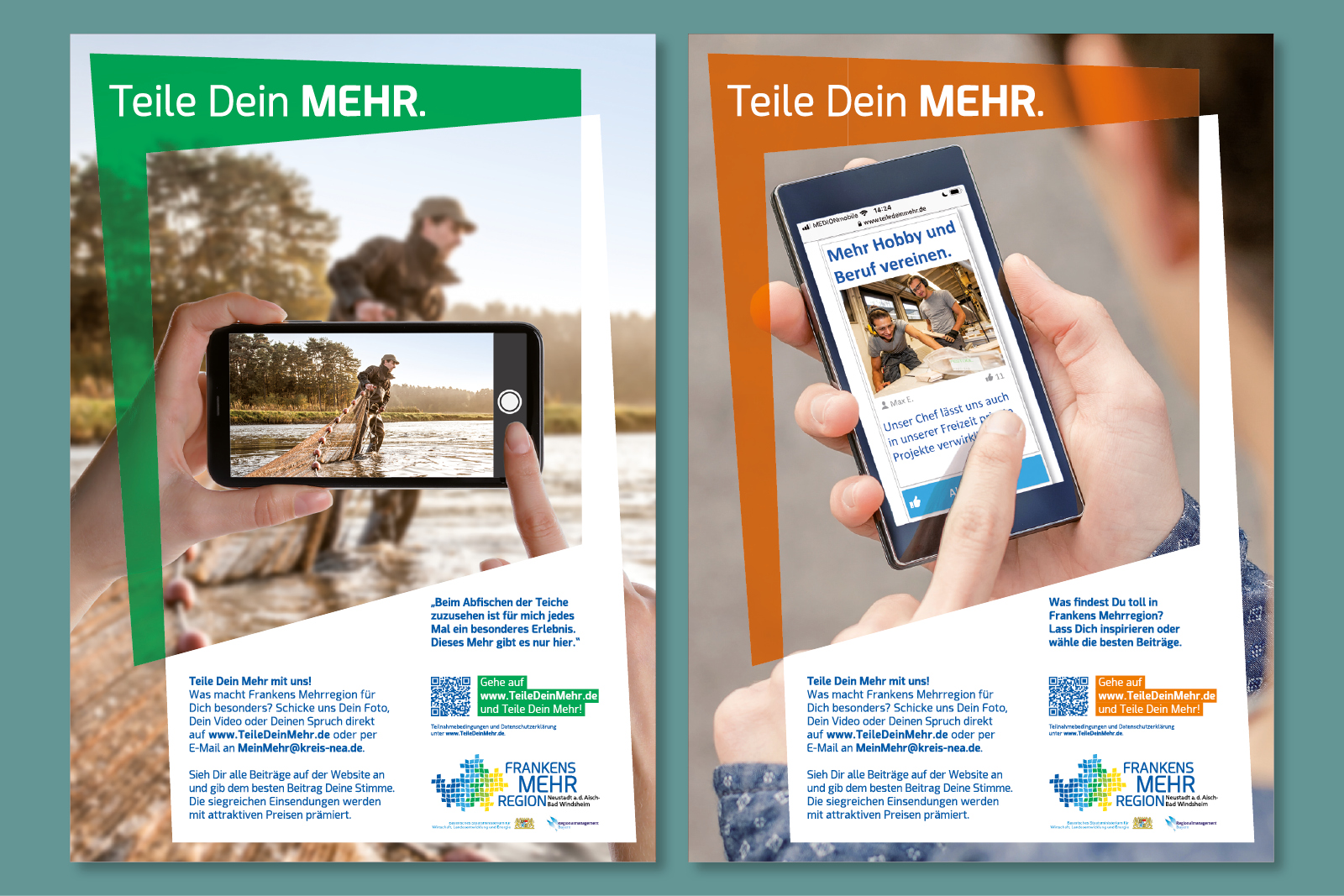 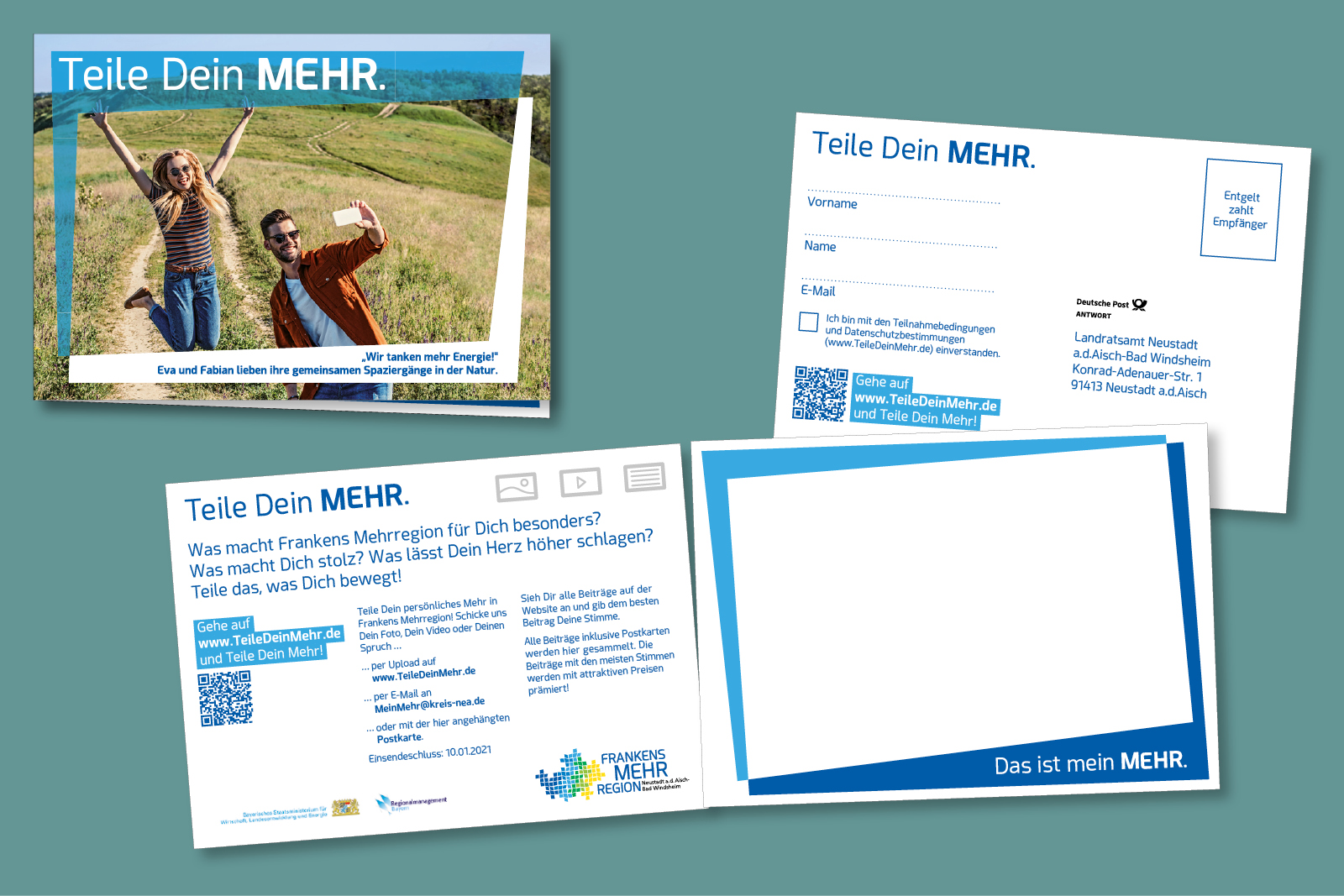 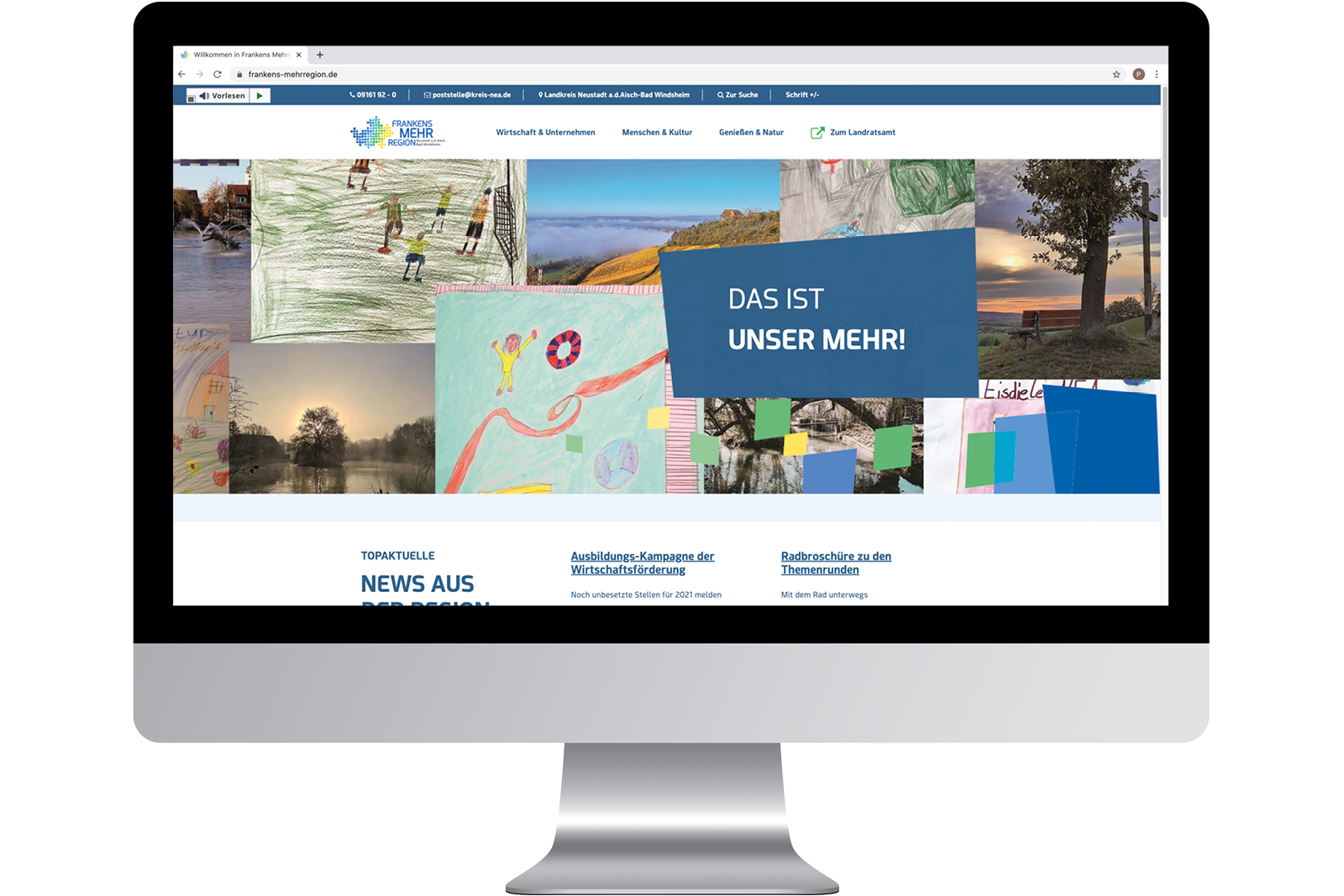 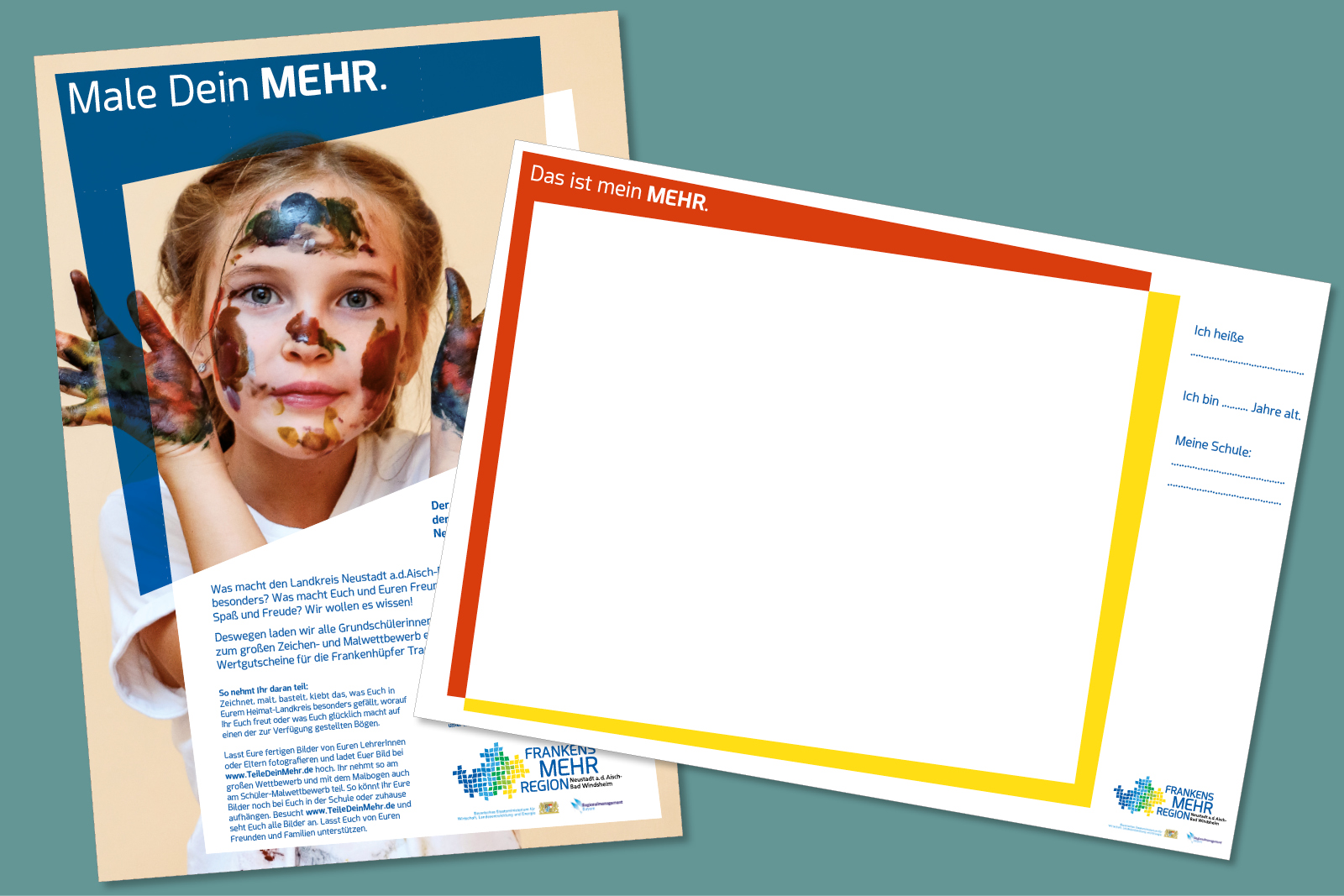 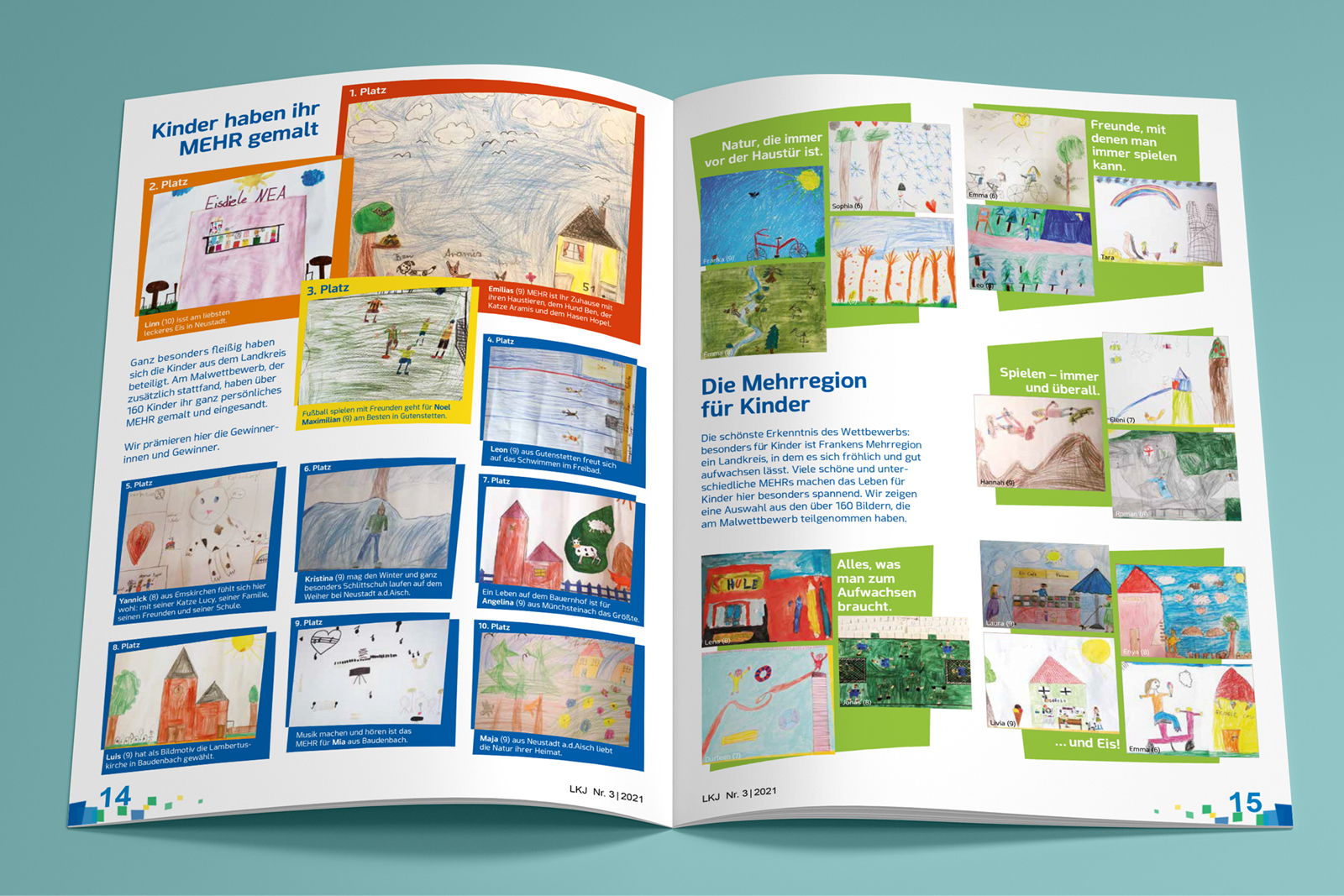 An image campaign that has given »More«.

The image campaign for Franconia’s multi-region was supported by a measurement of success. For this purpose, EMBASSY designed a survey that could be distributed and answered online and via the Landkreisjournal. Almost 300 people from the district took part.
The initial results fed into the design process and also served as a zero measurement.
At the end of the campaign, the survey was repeated on the same scale in order to measure awareness (unaided/aided), recall of content and development of image values. After two years of campaigning (before the last campaign wave), the success measurement already shows convincing figures: all image values were rated significantly better than two years ago.

For example, the statement »Frankens Mehrregion does not have to worry about the future« was rated 7.7% and therefore better than before. A remarkable increase considering it is a rural region. The contents of the campaign were also well remembered. Instead of categories like »leisure offers«, people remembered the concrete offers and tips: Cycle paths, hiking trails, excursions. The population learned to appreciate the most important offer of the district in the past two years: »nature«. »More«, the key word of the region, was also not mentioned in 2019, but was brought to the awareness of the population with the campaign. 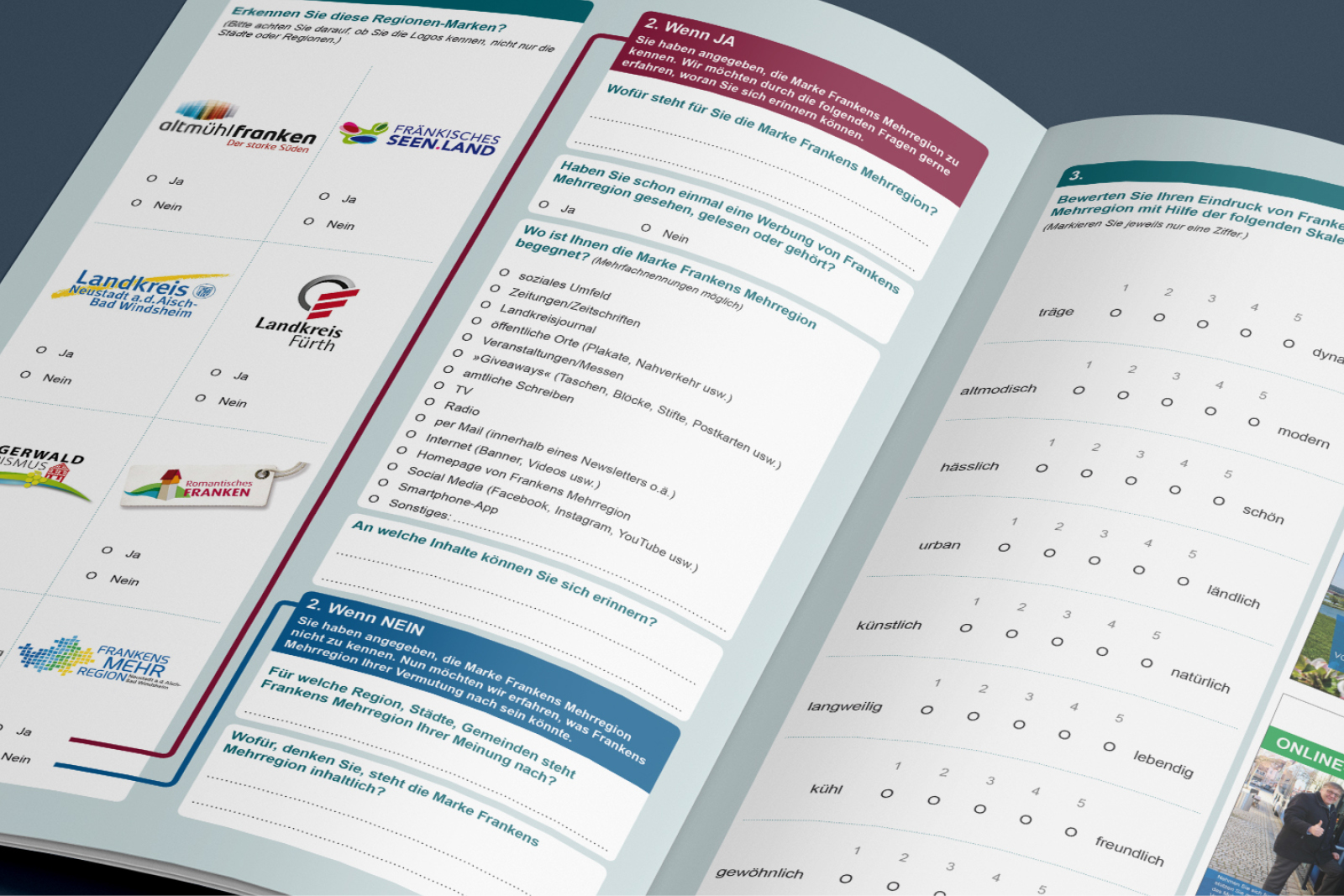 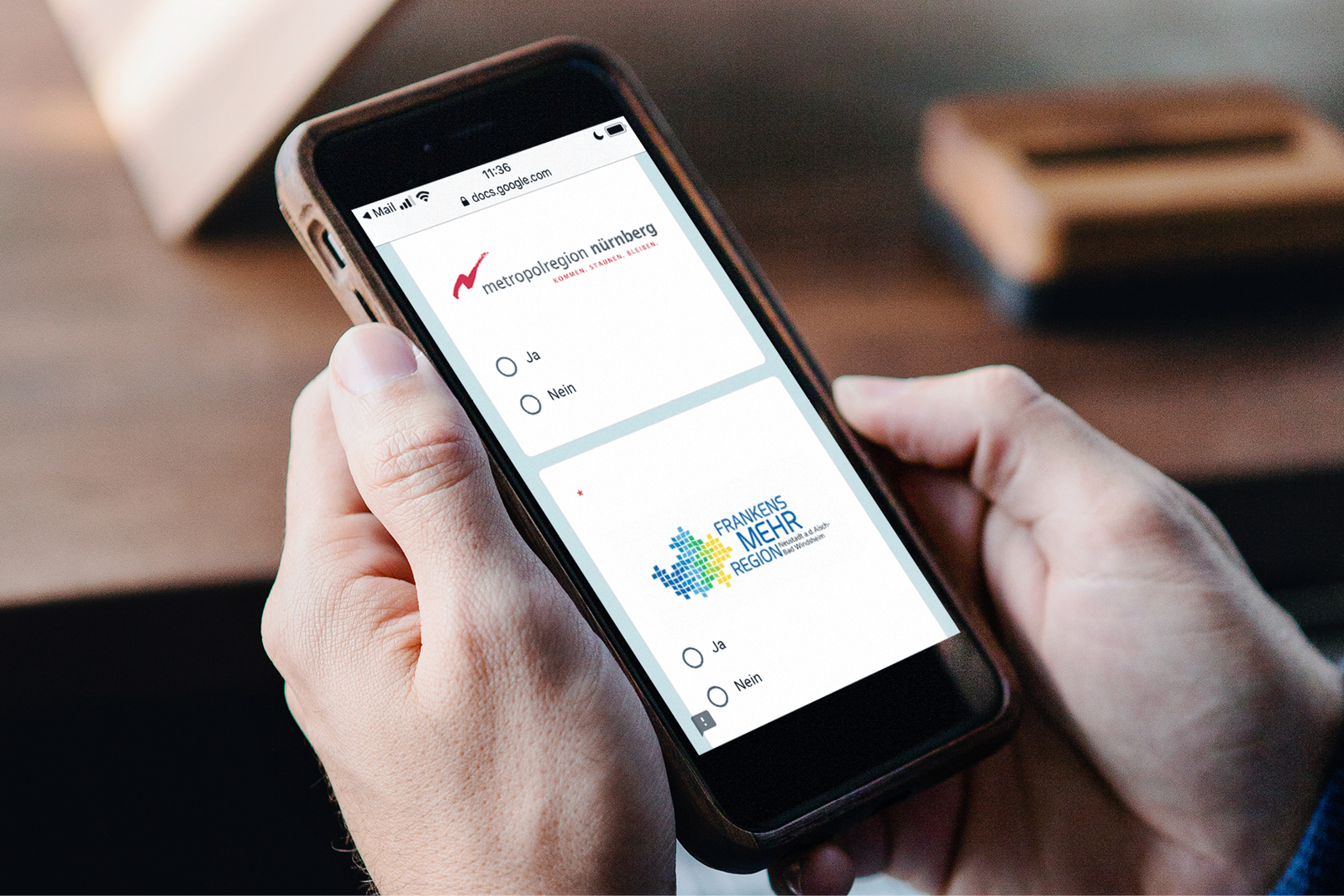 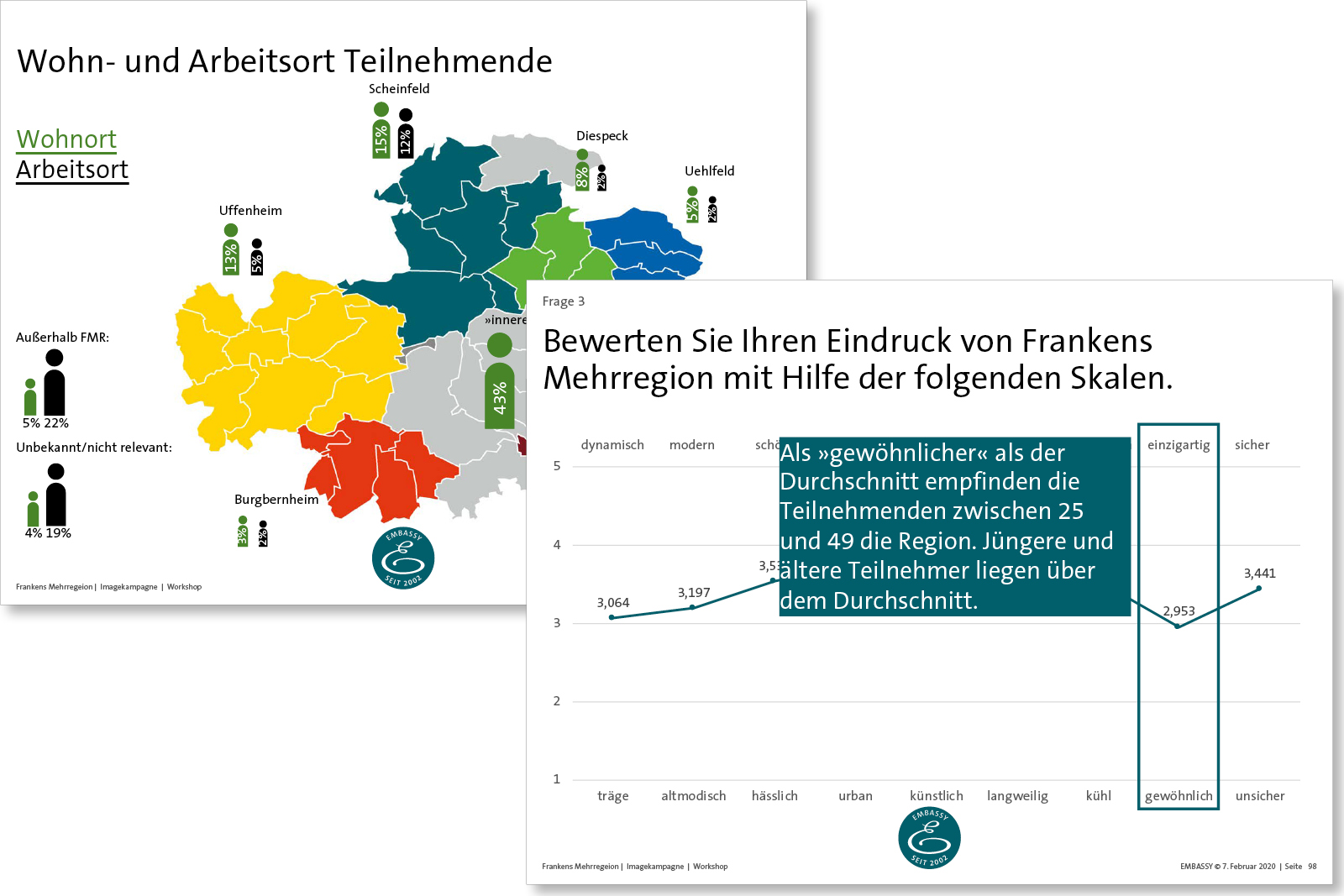 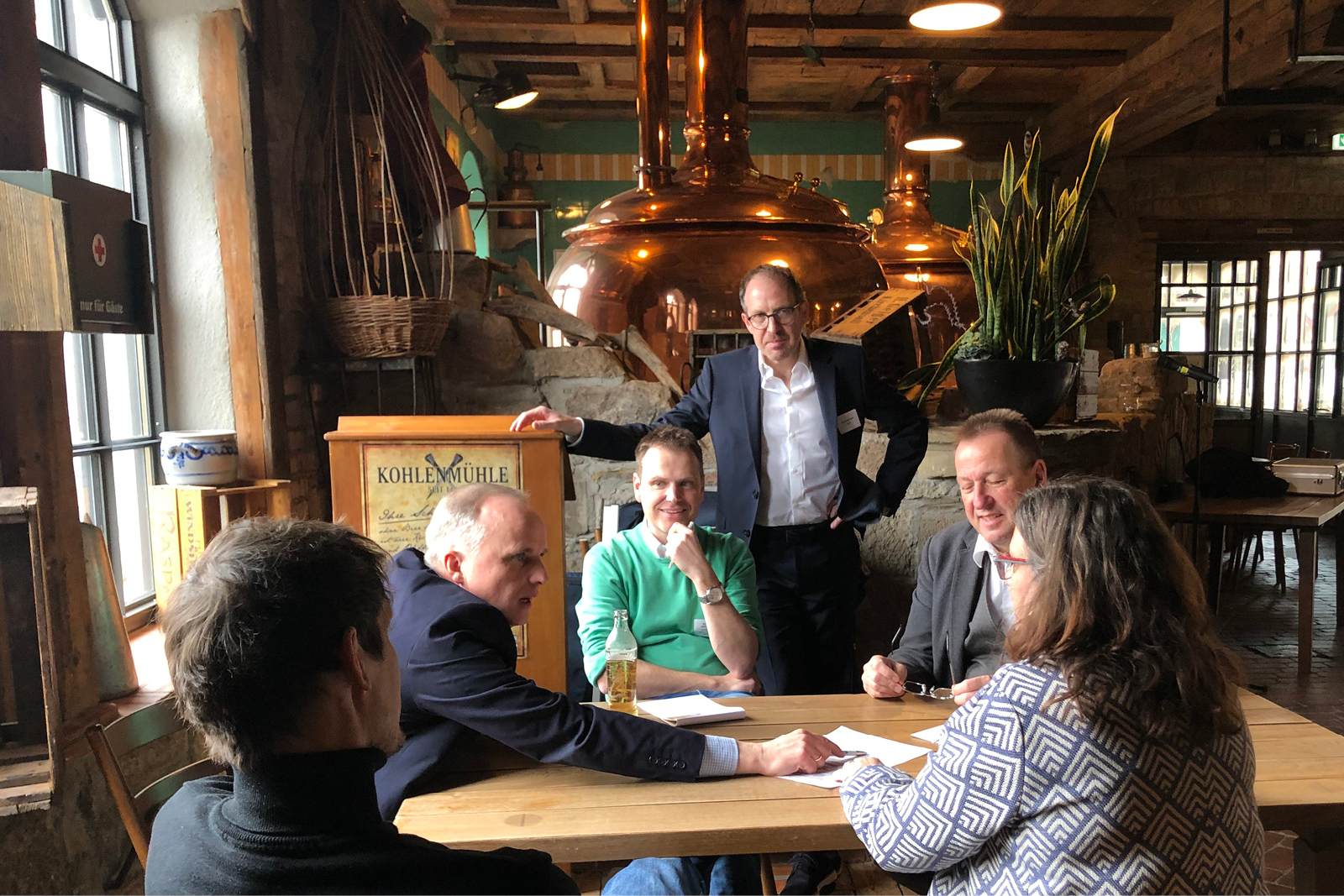